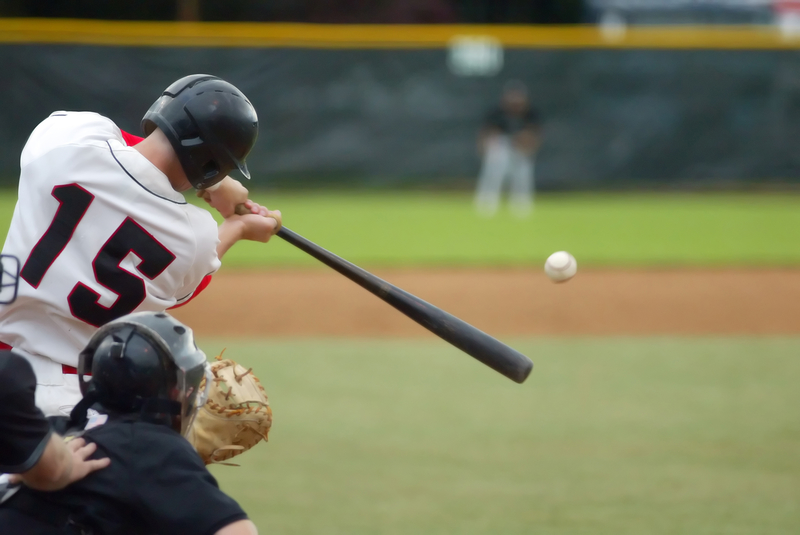 Thefeint 3rd to first pick off move is no longer a legal move in Dynasty Sports Tournaments and will be a balk.

Batting  • Teams can bat a 9-player lineup, a 10-player lineup using an extra hitter (EH), or roster bat all present uniformed players.  The lineup must be declared before the start of the game and used the entire game.  Example: When a team shows up with 15 players ready to play the coach has the option to bat 9, 10, or all 15 players. The coach cannot bat 13 players with 2 subs.  If the coach chooses to roster bat he must bat all legal players at the game.   • Extra hitters (EH) can move freely in defensive positions.  •  If a team chooses to roster bat, then all players other than the 9 defensive position players are extra hitters and can move freely in defensive positions.  Example: If a player has to leave the lineup during the game due to illness or injury and the team has no subs left or the team is roster batting, then no out will be recorded for the injured/ill  player’s at bat.  The Player is skipped in the lineup.  If this incidence occurs, it must be reported to the umpires and the opposing team. Once a player has left the game due to illness or injury, he or she may not return.  • If eligible, a courtesy runner can be used any time for the pitcher or catcher of record.  A courtesy runner is defined as a player not currently active in the lineup.  If roster batting, the courtesy runner is the player with the last recorded out.  • For teams that are not roster batting, the starting players can withdraw and re-enter once, provided that they re-enter in their original position in the batting lineup.  Once a pitcher is removed from the pitching position, he or she cannot return to the pitching position during a game, but can re-enter to any other position.  • Teams can play an official game with an 8-player lineup. If a team plays with an 8-player lineup, an out is declared for the ninth position in the batting lineup at each turn at bat.  The team with only 8 players is the visiting team.  • Teams must have a minimum of 8 players to start a game. Any number less than 8 and the game is declared a suspended game and is not rescheduled.  The suspended game is then ruled a forfeit by the tournament director.  Umpires have no authority to forfeit a game.    • If a team has a ninth player arrive after the game has started, the player is announced to both the plate umpire and the opposing team and is placed in the ninth spot in the batting order. The game resumes as if he or she was there at the start of the game.  • If roster batting, player(s) arriving after the game has started are added to the bottom of the batting lineup.  If batting nine, or ten with an EH, players arriving after the game has started are added to the lineup as legal substitutes.  • If a team drops below 9-players due to illness or injury, no automatic out is recorded.  • If a team drops below 9 eligible players due to an ejection or any reason other than illness or injury and leaves the game, an automatic out is declared in the batting order position of the player that left the game unless there is an eligible substitute.  • If a team drops below 8-players for any reason, the game is ruled a forfeit and is not rescheduled.  • In all live pitch divisions, an intentional walk is granted upon request.  • A legal slide can be either feet first or head first.  If a runner slides feet first, at least one leg and buttock must be on the ground.  If a runner slides, he or she must slide within the reach of the base with either a hand or a foot.  • Runners are never required to slide, but if a runner elects to slide, the slide must be legal.  • If a tag play is imminent, the runner should slide or seek to avoid contact. Jumping over a player is not considered an act of avoidance.  • No player can initiate malicious contact.  It is the umpire’s judgment call that determines whether the contact is malicious.  Penalty: The player initiating malicious contact is removed from the game.

Note: There can be a collision where both players go head over heels that is not considered malicious contact.  The key for malicious contact is intent.  Umpires must ask themselves when making the call, “Did the runner deliberately or intentionally run into the fielder to break up the play or cause harm to the fielder?”  If the answer is yes, then there is malicious contact. If the answer is no, then it is a clean play without malicious contact.  Umpires must be careful when making this call to avoid ejecting players if the intent is not malicious.  Keep in mind that younger players are just learning the game. Sometimes unintentional contact is made between a runner who does not slide and a defensive player. Remember, the key word is intent.